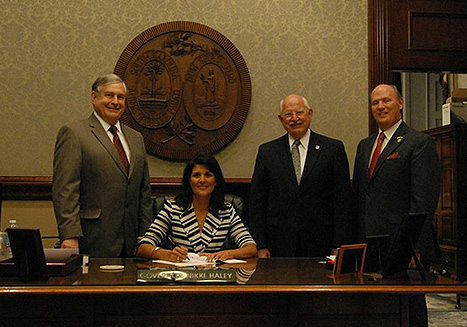 Bill enables local governments to equitably give gifts to volunteers

Before today’s signing, local governments did not have the right under state law to give volunteer gifts, based on a ruling by the S.C. Attorney General. The ban on gifts was based primarily on a concern that the gifts would be awarded on a sliding scale or based on merit, rather than equitably to all volunteers.

Rep. Sandifer, who was on hand as Gov. Haley signed the bill, said he introduced the legislation in response to a specific constituent need.

“The Volunteer Service Personnel Appreciation Act was born after I received a concerned call from Seneca officials when they realized current state law did not allow them to give gifts to their volunteers,” Sandifer said. “Seneca leaders came to me and asked me if I could do something to change the situation, so I worked with my House and Senate colleagues to develop legislation.”

“Volunteers are crucial to municipalities and give so much of their time and energy to make our communities better places to live. Additionally, our volunteer firefighters, law enforcement officers and medical personnel risk their lives in the line of duty,” Sandifer continued. “I see no reason why local governments can’t show their appreciation, especially when it is done fairly and equitably, as this law now ensures.”